In previous sessions, we assumed that those that left the congregation were swayed from the truth by the Gnostic heresy.  In session 13 we will transition that assumption into a fact.  If you are just joining in, all sessions are online at www.hbcc.life and on YouTube channel hbcc.life.  Use those share and subscribe buttons to help get the messages out.

Those that left the congregation rejected the gospel’s revelation that Jesus is fully God and fully human.  These are the ones that John has labeled liars and anti-Christs.  Their denial of Jesus Divinity and humanity make salvation impossible.

Last time we considered why it is necessary that Jesus is both fully God and fully human for His death on the cross to be an atoning sacrifice.  Do you realize that in the created order sinners must atone for their sin or face the dire consequences of being separated from the Creator of the Created Order?  An atonement is best thought of in relational terms.  The atonement makes reconciliation with God a possibility.

The Genesis account of human origins reveals that God created the world and humanity in righteousness.  The body is good. The material world is good. Everything was very good (Genesis 1:31).  God endows humanity with free will (Genesis 3:3).  Free will is necessary for humanity to return the love that God lavished upon mankind.  You can’t call it love if it's forced, if it’s programmed in, you can’t say love me or else. Loving God is to freely choose to obey His commands.

The Adam was tempted to become equal with God, he believed a lie that equality with God was something that he could grasp.  The result is what we call original sin. Original sin is best thought of as estrangement to God, two who were once in fellowship are no longer (Genesis 3:23).  Disobedience to God, the failure to love God, always puts people in darkness.  In the darkness, there is just stumbling around creating hells on earth (John 11:10).

The unknown side effects of the Adam’s grasping was to be cut off from the guiding light of divine authority.  In the darkness, Adam is left to himself the authority to determine what is good and what is evil.  Look at history and you can see that this hasn’t gone well for the human race.  Look at your own life, the messes, the broken relationships, the dead ends that have led to pain, frustration, and suffering all a result of actual sins, things we have done that deterred, damaged, or destroyed our healthy connections with others. Man’s disobedience plunged humanity into spiritual darkness.  We’ve been stumbling ever since.
God’s great love for His creation, for you, motivates the incarnation. God, Himself becomes human so that He could reconcile humanity’s offense within Himself (Philippians 2:5-8).  Representing humanity and divinity Jesus receives into Himself all that was necessary to make atonement so that we can be reconciled to God and to each other.

Now through acknowledging you estrangement from God and others, believing the Jesus has made it possible for the reconciliation of all our relationships, committing to doing life the way Jesus modeled, you and I can be made right with God and empowered to make things right with all others.  You can enter into a right relationship with God right now, simply by asking God to accept your faith.  Right now you can enter into the light of knowing God and become the person He created you to be. Step on into the light, I want you in the light. In the spiritual economy of the universe, it is because Jesus is fully God and fully human that reconciliation and salvation are possible.  It is this gospel that those that left once believed but have rejected (2 Corinthians 5:18).

Those that left exchanged the truth for a lie. They adopted a different gospel, one that had no good news in it at all (2 Corinthians 11:4 & Galatians 1:8). The Gnostic’s rejected the truth that Jesus is fully God and fully human (John 10:30). There was never a rigid Gnosticism, the movement holds many ideas. In general Gnostic thought taught that God is spirit.  That everything spirit is good.  They taught that everything material was evil. There was no way that God the absolute good could become part of the material world. God is eternal, therefore there is no way that God could die.

This general thought leads to various hypotheses about the nature of Jesus. They believed the Christ to be spirit.  When the man Jesus was baptized in the Jordan the Spirit descended upon him. They taught that is when Jesus was filled with divinity but was not divine.  When Jesus was being crucified and He said; “my God my God why have you forsaken me,” they taught that the Christ spirit departed from the man Jesus.  Just a man is executed on Golgotha.  The resurrection was not a bodily but rather a spiritual resurrection.  Separating the Christ spirit from Christ denies the divinity of Jesus.

Another stream of Gnostic thought taught the Jesus was not really flesh and blood, not really a human at all.  Rather what appeared to be Jesus was an illusion, like a hologram.  God was pretending to be human. This of course is a denial of Christmas, our celebration of the incarnation. The Christ spirit just seemed human.  Running with this thought there was no resurrection because no one actually died on the cross. The resurrection is the spirit being freed from the body that the soul may return to God.

Jesus is a great prophet, a human messenger of God’s special knowledge, but not God. Jesus taught the secret truth of God to a select few and general revelation to the masses.  It was by attaining to this secret knowledge that one’s spirit is freed from the prison of the body.  This secret knowledge made union with God a possibility. Forgiveness of sins is not necessary, morality or immorality is an illusion, what matters is union with God.

In Gnostic thought, there is a maximum emphasis on the spiritual with a disregard for the material. When you acquire the secret knowledge your spirit is set free from your body.  Your soul is now pure. What happens in the material has no bearing on the spiritual.  The knowledge sets you free. You can indulge your body’s desires in hedonism or you can deny your body in asceticism.  It is only the spirit that matters.

Now you might think that such beliefs have been lost in the dust of history but forms of Gnostic thought are alive and well today.  Jehovah’s Witnesses, The Church of Latter-Day Saints, Christian Science, Progressive Christianity all include some deviation of Gnosticism in their belief system denying the Divinity and or Humanity of Jesus.  In psychology, Carl Jung promoted Gnostic belief (The Gnostic Jung, Psychological Types) Yoda taught us we are luminescent beings, not this crude matter.  The Matrix movies are another example of Gnostic ideas. Dan Brown’s The Da Vinci Code, a good read, while being full of gnostic claims. Many practices and beliefs in what is generally termed New Age are gnostic.  Also, the Mason, The Scottish Rite, The Rosy Cross all are influenced by Gnosticism.

When the goal is self-actualization, a self-realization, a deification of subjective experience, it all results in some sort of spiritual narcissism.  Mind over matter, spirit over flesh, what the mind can conceive the mind can achieve, maximize your inner potential, and make your own way. This is not to say that all Gnosticism is bad, it is just incompatible with Christianity.

When gnostic ideas enter today’s Church, faith becomes the force of Star Wars.  Pastor Noelani of Jesus House speaks of people worshiping Vending Machine God and Shelf Jesus instead of the Almighty Father, Son, and Spirit.  When your own subjective experience becomes the final arbiter of spiritual truth, and you’re just lead by “the Spirit” while rejecting historical orthodoxy, the creeds and traditions of the Church, and passages of Scripture that you don’t like, such a way of doing life is gnostic in nature, it is anti-Christ. Listen closely friends: there are no new revelations that supersede the revelation that is ours in Christ.  Don’t allow modern gnostic ideas to steal your faith.

We have firmly established that John declares that Jesus is fully God and fully human.  John develops this idea further

The Apostle Paul writes that Jesus is co-equal with God the Father.
Philippians 2:5-6 (NIV)
Your attitude should be the same as that of Christ Jesus: Who, being in very nature God, did not consider equality with God something to be grasped…

Philip one of the 12 Disciples ask Jesus to reveal the Father to him.

John 14:9 (NIV)
Jesus answered: "Don't you know me, Philip, even after I have been among you such a long time? Anyone who has seen me has seen the Father.

Then to the congregation meeting in Colossi, we read that Jesus is the image of the invisible God. (Colossians 1:15)

Don’t be surprised if later on in the history of the Church there is going to be a slew of what we call Trinitarian Heresies as we try to figure this one out.  Those controversies we’ll save for another time. For now, the end of the argument is seen in a simple diagram of orthodoxy: 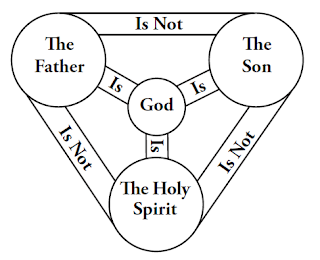 In our time together we have firmly established our assumption that those that left the congregation were swayed from orthodoxy into heresy by Gnosticism.  We know that those that left, the secessionists, claimed a better salvation than the one offered in the gospel, which is no salvation at all.  Another spiritual fact was clarified in that not only is Jesus fully God and fully human, but Jesus and the Father are also one.