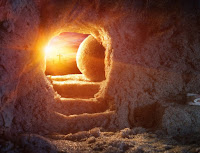 Sunday, the horizon is brightening as night gives way to day. A few of the followers of Jesus make their way to the place where Joseph of Arimathea had the body of Jesus entombed. The Sanhedrin had the Romans close the tomb,
fearing Jesus’ disciples would steal the body away in the dead of night and proclaim that He had risen. A Roman guard was set, the stone was sealed. When that hand full of disciples arrive at the site, they find no guards, the tomb open, the body missing. Their reaction was not what I expected:

Mark 16:8 (MSG)
They got out as fast as they could, beside themselves, their heads swimming.
Stunned, they said nothing to anyone.

I have presided over a number of funerals. In some, the families chose to have an open casket, the body of their deceased loved one on display. At the end of the memorial service, the casket is closed and then immediately taken to the place of interment. In one service the family remained as earth filled the grave.  No doubt where their loved one's remains rested.

Having witnessed this, I thought to myself what would be my reaction, my thoughts, if I came back to discover an empty grave. I am sure I would have thought: “Why did someone exhume the body?” If I asked and discovered that place had been locked up and the groundskeeper, and the administration,
had no idea what happened. I might have left whistling the theme song to the X files. I can see myself with those disciples “beatin feet” out of the area.
But hadn’t Jesus told them in 3 days he would rise? (Mark 10:33-34)

A little later in the day. Mary Magdalene has an encounter. She is sure it was Jesus.
Mark 16:10-11 (MSG)
She went to his former companions,  now weeping and carrying on, and told them. When they heard her report that she had seen him alive and well, they didn't believe her.
I must confess I too would not have believed her story. I most likely would believe that she believed her story and that something happened. But experience tells me the dead only rise is horror stories.

A little later in the day, two more of the group show up, they were headed out of Jerusalem and on the way to Emmaus. They tell the rest of the disciples that Jesus appeared to them.
Mark 16:12-13 (MSG)
Later [Jesus[ appeared, but in a different form, to two of them out walking in the countryside. They went back and told the rest, but they weren't believed either.

I am a skeptic by nature. I would have been standing in agreement with one of the 12 disciples, the guys who were handpicked by Jesus. Thomas spent three years with Jesus, walking the roads, visiting the villages, seeing the miracles, hearing the preaching, getting his hands dirty. This is his response to the claim that Jesus had risen from the dead:
John 20:25 (NIV)
But he said to them, "Unless I see the nail marks in his hands and put my finger where the nails were, and put my hand into his side, I will not believe it."

Yeah, I would have had to see it, touch it, taste it, hear it and have it confirmed by three other people that what I was seeing was what I was I really seeing. I remember my prayer asking God to save me.“ God if you are there, really there, I will believe in you, but you have to prove it.” Here I am today. The proof totally subjective, but I believe, I am convinced, I’ve staked my life upon it.

In 1972 Josh McDowell released a book called Evidence that Demands A Verdict.
One portion of that book is dedicated to the resurrection. Lots of convincing arguments. But logic and arguments are not why I believe, I believe because I have had encounters with God. I have no other explanation that fits the experiences.
I think that’s the only way you will overcome any skepticism you may have, is your own encounter with the risen savior. Yes, your own experience that leaves you convinced that you have been in the presence of Jesus.

Ask for it, desire it, seek it with your whole heart, something will happen. God will meet with you; sometimes in dramatic fashion, most often very subtly, regardless which way, you will know. Then you too will be convinced that the reason the tomb was empty is that Jesus is alive.

Seek it out, make yourself available for an appointment with God. By desiring one.
Asking for one. Expecting one.

This resurrection life has a here and now aspect, and a then and later aspect. I want to consider the then and later aspect first because I know so little about it. Jesus teaches us:
John 12:24-25 (MSG)
"Listen carefully: Unless a grain of wheat is buried in the ground, dead to the world, it is never any more than a grain of wheat. But if it is buried, it sprouts and reproduces itself many times over. In the same way, anyone who holds on to life just as it is destroys that life. But if you let it go, reckless in your love, you'll have it forever, real and eternal.

The grain is not resuscitated, the grain is not reincarnated, the grain goes through death and becomes something new.
1 Corinthians 15:42-44 (MSG)
This image of planting a dead seed and raising a live plant is a mere sketch at best, but perhaps it will help in approaching the mystery of the resurrection body—but only if you keep in mind that when we're raised, we're raised for good, alive forever! The corpse that's planted is no beauty, but when it's raised, it's glorious. Put in the ground weak, it comes up powerful. The seed sown is natural; the seed grown is supernatural—same seed, same body, but what a difference from when it goes down in physical mortality to when it is raised up in spiritual immortality!

The resurrection power that moved Jesus from death to life moves through His faithful followers. Jesus said:
John 11:25-26 (MSG)
The one who believes in me, even though he or she dies, will live. And everyone who lives believing in me does not ultimately die at all.
Though this physical body dies, the grave does not have the last word. Resurrection power awaits those who die in Christ. What that life will be like,
I do not know. I expect it will be far more than we could ever dream or imagine.
(1 Corinthians 2:9)

So let me turn our attention to resurrection life here and now. We get a glimpse of the miracle that occurs in the here and now in our ritual of baptism. For centuries it was an initiation rite into being a disciple of Jesus. Believers were immersed in water, total dunk. Candidates for baptism would proclaim their testimony, talk about their encounter with the living God. They would walk to the water symbolizing leaving their old life behind. They would be submerged in the water symbolizing identity with the death of Jesus The would come up out of the water headed in a different direction than when they came in symbolizing their new life, a symbol of the resurrection life.

The Apostle Paul writes:
Romans 6:3-10 (MSG)
When we went under the water, we left the old country of sin behind; when we came up out of the water, we entered into the new country of grace—a new life in a new land!

That's what baptism into the life of Jesus means. When we are lowered into the water, it is like the burial of Jesus; when we are raised up out of the water, it is like the resurrection of Jesus. Each of us is raised into a light-filled world by our Father so that we can see where we're going in our new grace-sovereign country. Could it be any clearer? Our old way of life was nailed to the Cross with Christ, a decisive end to that sin-miserable life—no longer at sin's every beck and call! What we believe is this: If we get included in Christ's sin-conquering death, we also get included in his life-saving resurrection. We know that when Jesus was raised from the dead it was a signal of the end of death-as-the-end. Never again will death have the last word. When Jesus died, he took sin down with him, but alive he brings God down to us.

Resurrection power means the old way of living is gone, And you are empowered to live a new way.

The here and now evidence of the resurrection life, the down payment for what is coming in full. Resurrection life brings with the believer moving forward from spiritual death to spiritual life.

1 Corinthians 2:14-15 (MSG)
The unspiritual self, just as it is by nature, can't receive the gifts of God's Spirit. There's no capacity for them. They seem like so much silliness. Spirit can be known only by spirit—God's Spirit and our spirits in open communion. Spiritually alive, we have access to everything God's Spirit is doing, and can't be judged by unspiritual critics.

In a new spiritual life we become spiritually aware. Spiritual truth begins to be understandable. Sins are forgiven. Estrangement with God reconciled. The Holy Spirit empowers new behaviors, guides you into all truth. The believer is adopted, accepted into God’s family.
2 Corinthians 5:17-18 (MSG)
Now we look inside, and what we see is that anyone united with the Messiah gets a fresh start, is created new. The old life is gone; a new life burgeons! Look at it!

You move forward from death to life. Jesus likened the experience to being born anew. You’ve become something new. You grow into what you will become.
What you will become is someone who is like Jesus. You will become the person God always intended for you to be. Now you are on a spiritual adventure, a journey of becoming, of intimacy, of truth.

There are changes in attitude, thoughts, behavior. There is often freedom from negative habit, attachment or addiction. There are ways of the old way of living that are no longer appealing. Resurrection life is an inside-out transformation.

Galatians 5:22-23 (MSG)
He brings gifts into our lives, much the same way that fruit appears in an orchard—things like affection for others, exuberance about life, serenity. We develop a willingness to stick with things, a sense of compassion in the heart, and a conviction that a basic holiness permeates things and people. We find ourselves involved in loyal commitments, not needing to force our way in life, able to marshal and direct our energies wisely.

Jesus said that He came to give everyone who believes in Him life to the full.
Life to the full is following Jesus in obedience, Being His disciple. As you learn to live His way, your life begins to fill with love, joy, and an internal peace. There is a growing sense of purpose; what you do becomes more and more meaningful. Your life takes on a new significance as you start doing the things God has always intended for you to do.

Through the power of resurrection, Jesus created a new reality for every one of us.
Because He lives, present tense, active, alive, that new resurrection reality continues to unfold for every disciple.  Jesus didn’t come back to life,
He came forward from death to a new life. A radially transfigured life.

The good news of the gospel is about Jesus inviting people not to live a resuscitated life, a “rerun” life, a reincarnated life, but a resurrected life—-
a new life full of new possibilities, new promises, new realities for a whole new future. That’s the message of Easter. Embrace it. Become it.

I serve a Risen Savior
https://www.youtube.com/watch?v=KFz_jHPJh-g