What is the Church to do with those different from "us"? 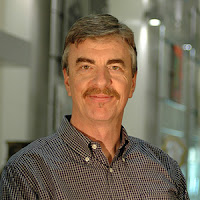 (Mike) What is the Church to do with those different from “us?” Is inhospitality, or even hostility, a Christ-like response? It seems to me that what got Jesus ire up was the religious charade, not the sinners and tax collectors. As a pastor, a shepherd, one who cares for souls, I feel trapped between compassion for the human being and behaviors that are inconsistent with discipleship. (I’ll pick up my comments at the end of this exchange between Craig and friends.)

Dr. Craig Keen has been my mentor and friend since the mid-1980's. I have a deep respect for his intellect and his integrity. He has helped me think, which is a great gift. Student, Teacher, Husband, Father, Friend, now maybe Prophet, Craig enters into dialogue with us about the behavior of certain members of the Church who closed-mindedly condemn others.

Craig Keen
I'm getting pretty doggone close to maintaining that anyone who so confidently believes that LGBTQ+ praxis is in every case *sinful* (and it makes me mad just to type this!) that he or she will hunt down those who would disagree in order to rid the Church of their kind--has crucified Jesus a second time. What I am willing to say is that were he to walk into your Jerusalem and up to your temple, he'd make a pronouncement about strangers and eunuchs, and then he'd overturn all your tables, as you cowered in fear and then raced to the safety of your self-assurance, pseudo-righteousness, lovelessness, and phariseeism. Lord have mercy! Maranatha!

Craig Keen Greg, thanks for asking stuff here. What I think is that the prohibition of male/male or female/female sex in the OT has everything to do with the very rigorous system in place there to keep Israel alive and well. The NT talks about the law as a servant who led a child to Christ and also as a foreshadowing of what was to come. The purity laws of the OT were very strict and very numerous. Pretty often they were there just to show that Israelites were to be absolutely focused on the one thing of pursuing the one God. And so fabrics were not to be mixed. But generally, wellbeing was sought in everything. What is so shockingly different in the gospel is that wellbeing is no longer crucially important. It's still a good thing, but not so good that the wellbeing of the church is prioritized over the love for and reception of those who will inevitably be hard on the church and hard on the chances of survival of its people. That's why strangers and eunuchs are so readily welcomed into the church. That's also why people who have diseases or are poor or old or otherwise resource-draining are welcomed. Since reproduction no longer has to be maintained, since it's okay to die (since the gates of hell will not prevail against the church), people are free to be single (in fact Paul prefers singleness). That's also why eunuchs are welcomed in, i.e., because they don't have to make children. That also means that the logic for forbidding male/male or female/female sex is no longer in place, except that it is still a good thing—though, again, an unnecessary thing—to procreate. Something that looks like what we call "homosexuality," of course, is being criticized in the NT. Not a lot of time is spent on it, but it's there. The problem is (and Adam points this out above) that it's way harder to tell what's being talked about in those passages than folks tend to think. It's tempting to think, "God said it, I believe it, and that settles it!" The problem is that since these passages cannot so oppose the logic of the gospel that the gospel is abandoned by them, they must not be saying what the opponents of all things LGBTQ+ say.

Donna  This conversation (when it focuses on God’s preoccupation with the tab and slot fit of genitals) deeming homosexuality just one evil among many or one bad choice (shudder) among other equally bad choices make me want to scream. Is this still where the discussion is for people? I am worlds from this nonsense. This is (partly) why I’ve given up on being a professional theologian. God help us!

Craig Keen It's where the discussion is among fewer and fewer people.

Donna   I hope you are right. It bores me. It tires me out. It is so inane. And it makes me toy with dropping the moniker ‘Christian’ every time... not because I’m angry or self-righteous, but because I believe the death and resurrection of Christ were surely about things more interesting and important than this.

Kevin Craig, thank you for this. As I’ve been following the discussion I’ve thought about the real people this impacts. I know (as I’m sure you and every other Nazarene know) numerous adults who were raised in the church, weaned by it yet when they accepted their God-given truthful gender or sexual orientation that same church said “no”. I grieve for those folk because this discussion isn’t theoretical; for LGBTQ youth it is (in some cases) a matter of life and death. I am grateful that my little UMC is affirming and accepting of LGBTQ folk. They have enriched our congregation and, in the case of one of my kids, was a wonderful and caring Sunday School teacher. I pray that the UMC and every church will finally leave discrimination behind and love and welcome all God’s children.

Craig Keen What most enrages me is that these people are excluded for the sake of some kind of "purity" that the gospel absolutely opposes.

(Mike) By “inconsistent with discipleship” I refer to several passages in the NT that list behaviors that the authors “clearly” indicate are the deeds of the sinful nature (egoism) and therefore not in keeping with righteousness.  Here is an examples:
Galatians 5:19-21 (MSG)
It is obvious what kind of life develops out of trying to get your own way all the time: repetitive, loveless, cheap sex; a stinking accumulation of mental and emotional garbage; frenzied and joyless grabs for happiness; trinket gods; magic-show religion; paranoid loneliness; cutthroat competition; all-consuming-yet-never-satisfied wants; a brutal temper; an impotence to love or be loved; divided homes and divided lives; small-minded and lopsided pursuits; the vicious habit of depersonalizing everyone into a rival; uncontrolled and uncontrollable addictions; ugly parodies of community. I could go on.

Which of the above behaviors should I condone? It seems to me all these behaviors mentioned are inconsistent with discipleship. Though I feel compelled to respect the person, is it not my duty as a pastor to warn of behaviors that will discredit one’s ministry, one’s calling, one’s discipleship? I believe it is. Certainly, I must judge these behaviors as wrong, while at the same time unconditionally love the individual.

My cousin asked if homosexuality is wrong, is the practice sinful? [Could that mean “Am I a bad person?” (By the way--. I have not seen in his life any of the behaviors listed in Galatians 5:19-2, where at times I still experience them in my own.) ] Do you see the trap? How do I show compassion but not condone and in not condoning still not leave the impression that I am judging or rejecting him?