Regardless of the Facts I Believe What I Want To 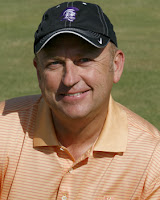 
Maybe I need to just say for myself, "Lord, save me from myself and my own selfish intent. Help me believe, as you do, that no one is beyond redemption."


Michael Johnson is in his eighth year as head coach of the Trevecca women's golf program. Coach Johnson is excited about this season, having seen the team move up the regional and national rankings. Johnson has led the program to five consecutive TranSouth Tournament Championships. The last, in the Spring of 2009, led the Trojans to their first ever NAIA National Championship Tournament.

Coach Johnson has been recognized with the TranSouth Coach of the Year honor on five occassions. Coach Johnson and his wife Sarah (Adams) live in nearby Old Hickory and have three sons: Chad (daughter-in-law Amy), Brian, and Austin. The Johnsons are members of the Trevecca Community Church of the Nazarene.In addition to serving for two years as

men's assistant golf coach at Trevecca prior to taking the reins of the women's program, Johnson served as interim head coach of the Trojan softball team in 1999. Prior to his work at Trevecca, Johnson revived the Southern Nazarene University baseball program in Bethany, Oklahoma 1996. If you or someone you know might be interested in playing for the Trevecca women's golf team, simply e-mail coach Johnson via the link above.
Thoughts