The Spirit of Christmas Future 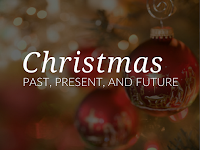 This teaching is an exploration of the ramifications of the incarnation.

The Spirit of Christmas Future

During these weeks before Christmas, we have been considering the incarnation, the mystery of God becoming human, drawing near to us so that we can draw near to him: The truth of Christmas past. We examined the plan within the incarnation; that with this “en-flesh-ment” of the Creator as Jesus of Nazareth God in Christ would reconcile sin’s universal estrangement of humanity that separated all of us from the knowledge of God: The truth of Christmas present. Both teachings reveal the love of God extended to each and everyone that we might enter into a right relationship with God, and in that knowledge find life eternal. Today we are going to explore the future ramifications of the incarnation. The scripture reveals three great truths, the second coming, the resurrection, and the restoration of the earth. Let’s explore the Spirit of Christmas future for it is full of hope, and by hope, we are encouraged.

The incarnation, the first coming, is the inauguration of the kingdom of God. The good news of the kingdom of God is that through faith in Christ you can be restored to a right relationship with God. You can enter the Kingdom. Your sins can be forgiven, your spiritual debt with God can be canceled. You can be adopted and made an heir of the Kingdom. You can be indwelt by the Holy Spirit, You can be empowered to live your life to the full.  Such gifts are yours through faith in Jesus. All you have to do is simply believe.

There is an interesting additional thought for you:

There is also a sense that the incarnation of Christ continues when you believe, the Word dwells in your flesh. This also is a mind-bending revelation, worthy of your contemplation.

God is incarnate in believers as each one of us partners with God allowing His will to work through us. The scripture encourages us to: “continue to work out your salvation with fear and trembling, for it is God who works in you to will and to act according to his good purpose” (Phil 2:12-13 (NIV).

Back to Christmas future.  As we move into what we call the future, the Kingdom of God in all its fullness approaches. It is the second coming of Christ which ushers it in.

7 [Jesus] said to them: "It is not for you to know the times or dates the Father has set by his own authority. But you will receive power when the Holy Spirit comes on you, and you will be my witnesses in Jerusalem, and in all Judea and Samaria, and to the ends of the earth."

9 After he said this, he was taken up before their very eyes, and a cloud hid him from their sight.

10 They were looking intently up into the sky as he was going, when suddenly two men dressed in white stood beside them. "Men of Galilee," they said, "why do you stand here looking into the sky? This same Jesus, who has been taken from you into heaven, will come back in the same way you have seen him go into heaven."

The Kingdom of God here on Earth is advancing, the Kingdom of God in whatever heaven maybe is approaching (Matthew 11:12). We see this is a careful reading of the Revelation of Jesus Christ. The second coming merges the two. The Kingdom is consummated in that merger.

The incarnation created an absolute identification of Jesus with those who believe. For believers with the event of the second coming is a resurrection (1 Corinthians 6:14) or just as incredible a physical transformation.

1 Thessalonians 4:16-17 (NIV)
For the Lord himself will come down from heaven, with a loud command, with the voice of the archangel and with the trumpet call of God, and the dead in Christ will rise first. After that, we who are still alive and are left will be caught up together with them in the clouds to meet the Lord in the air. And so we will be with the Lord forever.

Scripture is not explicit in what this resurrection body will be like. The 15th Chapter in the first letter we have to the congregation in Corinth we learn the resurrection body will be imperishable, immortal. Imagination suggests we will physically be as God originally intended for humanity to be. We know this, with certainty the result of second coming resurrection: “Death has been swallowed up in victory” (1 Corinthians 15:54 (NIV). God’s mighty power raised Jesus from the dead, if through faith you have believed and identify with Jesus, you will rise too and enter into life eternal. This is the future to which the incarnation points; humanity restored, no more sickness, disease or death. Rather intimacy.

Romans 8:20-21 (MSG)
Everything in creation is being more or less held back.

Human sin is so pervasive that it permeates the very planet itself. I can only assume that the earth is not as God created it. It bears the results of its steward’s sins.  What is broken with be made right.

There is a teaching that has floated around the Church for a long time. I don’t agree with the notion. The idea is that our eternity will be spent in someplace called heaven. I am sure you’ve seen those cartoons of harps and clouds. But that is not what the scripture reveals.

Rev 21:1-3 (MSG)
I saw Heaven and earth new-created. Gone the first Heaven, gone the first earth, gone the sea. I saw Holy Jerusalem, new-created, descending resplendent out of Heaven, as ready for God as a bride for her husband. I heard a voice thunder from the Throne: "Look! Look! God has moved into the neighborhood, making his home with men and women!

Revelation 21:9-11 (MSG)
"Come here. I'll show you the Bride, the Wife of the Lamb." He took me away in the Spirit to an enormous, high mountain and showed me Holy Jerusalem descending out of Heaven from God, resplendent in the bright glory of God.

The picture here is New Jerusalem, the Church, the believers fully establishing the Kingdom of God on earth. Earth is our home, it is the place created for humanity in which to thrive. The picture is of living again with the knowledge of our home, living in harmony with the planet. Our task just maybe turning the Earth into a garden, healing what has been disseminated by human ignorance and greed. This is the future to which the incarnation points.

Into your Christmas celebration add the hope of the incarnation. The babe in the manger will return as the King of Kings and Lord of Lords (Revelation 19:16). His return triggers a resurrection/transformation for all who believe in Him (John 6:40). Our home, this earth, will be made new (Revelation 21:5). An unimaginable future awaits those who believe in the incarnation. Don’t allow this glorious hope to slip through your grasp, or get lost in all the temporal stuff that we celebrate this Holy Day we call Christmas with.

If today you are on the outside, looking in, this hope of Christmas future can be yours. You can participate in what is going to happen. The invitation is open to everyone. Your response is to receive the great gift that God has given in the incarnation (John 3:16). Deity “enfleshed” in humanity (Philippians 2:5-7), the mystery of Jesus of Nazareth, who came (John 1:14), who modeled humanity (Hebrews 4:15), who died in an atoning sacrifice (1 John 2:2) that anyone who calls upon Him (Romans 10:13), who vows to be his disciple (Matthew 16:24), can be reconciled to the Father (Colossians 1:19-20) and made heir to this future (Romans 8:17), a participant in the second coming, a resurrection from mortality, a restoration of this earth. Simply believe.

Today if you are a believer, don’t allow Christmas to leave you empty. In the future, you win. Skirmishes may be won, battles may be lost, but you will win the war. Let the knowledge of being a winner over all the obstacles that keep you from knowing God encourages you to be an overcomer. Let the incarnation fill you will hope for the best future imaginable.

Ephesians 1:18-19 (NIV)
I pray also that the eyes of your heart may be enlightened in order that you may know the hope to which he has called you, the riches of his glorious inheritance in the saints, and his incomparably great power for us who believe…