Times are a Changin #3 Social Preserver 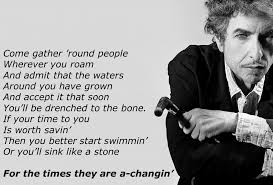 Times are a Changin #3  Social Preserver

The “Times are a Changin.”  This is our third session examining the signs of the times.   We are in one of those times when everything is changing.  We are leaving what was normal, what was familiar, what was regular, and transitioning into something other than what we have known.  The transition is only noticeable if you’ve lived a while.  The younger folks, don’t notice because they have never experienced anything different than right now.

What’s coming? Driverless cars, human-like robots, sexbots, the internet access will be through wet wear in your head instead of hardware in your hand.  You know how you can instantly broadcast what you are eating for breakfast, what's coming is the ability to convey your actual feelings, your real-time emotions, “I feel your pain” because you do.  Augmented reality will become normal, immersive virtual reality will be utilized for communication, the new way of entertainment.  You will have a personal 3-D printer to manufacture your clothes and the corporations will have expensive printers to create human organs from your DNA.  Speaking of DNA we will be able to turn off cancer cells, splice genes in and out to cure disease maybe even prolong life. Artificial Intelligence will be everywhere.  Bitcoin may replace hard currency as we move into a cashless society.  If you think, naw, it will never happen, take a look at your cell phone.

Then there is the social insanity we’ve highlighted in the previous two sessions to contend with.  Like this headline:  “Woke left will ‘ostracize anyone who disagrees with them, then label them ‘racist.’” [Hawley on 'Ben Domenech Podcast': 'Woke left,' corporations trying to drown out dissenting voices | Fox News]  If I am not politically correct then I am a privileged white homophobic misogynist racist male and my voice should, “for the good of the people.” be silenced.  The “times are a-changing.”  As always Christians of all ages are called of God to be influencers.  Jesus called His disciples the salt of the earth.

You are the salt of the earth.

If you are a Christ disciple, one who has acknowledged their need for God, believed that Jesus is the way to God, and committed yourself to follow God, then God has empowered you to be salt.  When Jesus called His followers salt, three things would have come to mind, purity, preservation, and flavor.  In the time between times, the times between what was normal and what is becoming normal believers are to be salt in the society.  Not salt in the wounds but rather a person who is pure of heart holds corruption at bay, and whose lifestyle of living to the fullest is attractive. How awesome the privilege God has bestowed upon those who follow Him to be influencers, to be the ones who are empowered to shape what is to come.  If you consider yourself a Christian, then you are salt.

If you want to be salt, to be one of the influencers, not the influenced, then ask God to make you salty.  The Holy Spirit will guide you in becoming the person God created you to be.  If you do ask, let me know. I want to help you as God works His transformation in you.

You are salt, the purifier, the preserver, the flavor of life.  When you live your life in obedience to God, a life of love, you are salty.  You make a difference in the world, you are a demonstration on how to live life to the full, yours are the hands that bring the Kingdom of God from heaven to earth, yours is the voice that God uses to set people free from sin, and death.

But if the salt loses its saltiness, how can it be made salty again? It is no longer good for anything, except to be thrown out and trampled by men.

Have you wondered why Christianity is losing its influence in society?  Why Christian teachings and morality are being rejected and trampled by society?  Why social insanity abounds?  Christians have lost their saltiness.  The Church, in a quest to be corporately successful, has adopted the ways of the world.  Worse we have made Christianity into a religion of rules, of do’s and don’ts, of I am right and you’re wrong, of division and schism, of judgment and rejection.   A rule cannot make you pure, tradition is not a preservative, rituals, doctrines, and theologies do not produce the flavorful joy in life that is so attractive.  Saltless Christianity is no Christianity at all. Christianity is all about a relationship with God and everything rises and falls on your relationship with God.

We are going to again differentiate between Religious Christianity and Relational Christianity.  In its original usage the word religion has two possible meanings.  “positively understood…religion is “a reconnecting to something important.”  Negatively understood, religion simply means “a return to bondage” (Bruxey Cavey, The End of Religion Cavey, p. 232).  When religion becomes a return to bondage it is all about a person's attempt to control God.  If I think these things, do those things, refrain from this, then God does what I want.  If I believe this, follow the formulas and formalities, participate in the ceremonies and sacraments, then I’m good, heaven awaits.  Religion becomes the mediator of grace between you and God (1 Timothy 2:5). Religion becomes the end instead of a means to the end which is a right relationship with God.  You become dependent, enslaved by the religious organization.  “The primary mission of Jesus was to tear down religion as the foundation for people’s connection with God and to replace it with Himself”  (Bruxey Cavey, The End of Religion p. 22).  The Temple in Jerusalem was the center of religious life in Jesus' day.  Have you noticed that in the book of the Revelation of Jesus Christ, there is no temple in New Jerusalem?

The main street of the City was pure gold, translucent as glass. But there was no sign of a Temple, for the Lord God—the Sovereign-Strong—and the Lamb are the Temple.

Religious Christianity “has been responsible for many great evils” (New Interpreter’s Bible 10:427).  The purpose of religion is to perpetuate itself.  Religion is someone’s idea as to how to get in good with God.  Religion attracts those who seek power, power to control the masses, to force what the one in power wants, regardless of the teachings of Jesus.  I’ve just finished teaching a class called Exploring Our Christian Heritage.  Believe me, when the followers of Christ turn a relationship into a religion, atrocities happen.  “The history of the church is not an example of Jesus’ teaching …but of His teaching being completely ignored, rationalized or trivialized” (Bruxey Cavey, The End of Religion, p 59).

“If your neighbor is having trouble with his automobile, you might think he just got a lemon. And you might be right.  Bur if you found that he was supplementing his gasoline with a quart of water now and then, you would not blame the care or its maker for it not running.” (p. x)

Religious Christianity puts religion between the believer and God.  When Jesus called His disciples He didn’t invite them to believe certain ideas, nor practice certain rituals rather He said “Follow Me” (Matthew 4:19).    Mahatma Gandi said:  “I like your Christ, I do not like your Christians.  Your Christians are so unlike your Christ.”  We become so unlike Jesus when we allow religion to supplant relationship.  “There is a difference, an important difference, between relating to God through systems of doctrines, codes of conduct, inherited traditions, or institutions of power, and relating to God directly, soul-to-soul, mind-to-mind, heart-to-heart”  (Cavey, p. 44).  Religion with all its precepts and practices is only when good when it enhances your relationship with God.  When it gives you the lowest denominator for spiritual life, when it gives you license to judge, hate, and a vehicle for disunity, when it becomes the rallying call for violence and seeking political power, then you’re being guided by something other than the Holy Spirit.

Salty “Christ-followers are those who, having been on the receiving end of God’s gracious love through Jesus, pour out this same embracing love to others in ways that mend broken relationships, heal inner wounds, and offer practical care for the helpless and hurting (Cavey p, 82).  This is relational Christianity.  Because of your relationship with God, you seek the highest good for everyone.

“God can do things that are not possible for people to do.“

People say the world is going to hell in a handbasket.  People will tell you we are at the beginning of the Apocalypse.  People will prophesy doom and gloom.  Has God changed?  No, “the times are a changin.”  If you decide to be salty you will influence others to embrace the Kingdom.  As the times change you will be the advocate for righteousness, demonstrating how to live in sync with God.

Salty Christians pass on to the next generation the values of the Kingdom.  The backdrop or the foundation of Kingdom Values is the gospel.

“For God loved the world so much that he gave his one and only Son, so that everyone who believes in him will not perish but have eternal life.

Heading the list of Kingdom values then is love (Matthew 22:37-39).  The people of the Kingdom value unity (John 17:21-23).  Unity has a direct bearing upon community which is highly valued (Acts 2:42-47).  Where there is unity within community there have to be the values of selflessness (Philippians 2:4) and forgiveness (Luke 172-4) and generosity (Luke 6:38).  To live like this requires faith, so faith also is a value of the Kingdom (Hebrews 11:1).  Towards those not in the community, there is genuine compassion that meets real needs (Matthew 25:45).  The Gospel along with Love, Unity, Community, Selflessness, Forgiveness, Generosity, Faith, Compassion are the Kingdom values that Salty Christians pass on to the next generation.

Salty Christians are full of love, joy, peace, patience, kindness, goodness, faithfulness, gentleness, and self-control (Gal 5:22-23 (NIV)). Their speech then must be seasoned with salt, its gracious, its encouraging (Colossians 4:6).

Salty Christians are the people God uses to change the world, to bring the Kingdom, to create heaven on earth.

If you are a follower of Jesus, a disciple of Christ, a believer, then you are salt.  Be salty.  Draw near to God be the salt this culture needs right now (James 4:8).

"Don't be intimidated. Eventually, everything is going to be out in the open, and everyone will know how things really are. So don't hesitate to go public now.

"Don't be bluffed into silence by the threats of bullies. There's nothing they can do to your soul, your core being. Save your fear for God, who holds your entire life—body and soul—in his hands.