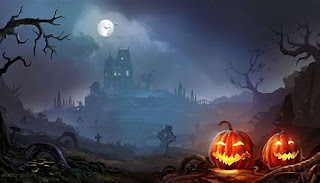 It was C.S. Lewis that wrote: “There are two equal and opposite errors into which our race can fall about the devils. One is to disbelieve in their existence. The other is to believe, and to feel an excessive and unhealthy interest in them.”  We are going to do our best to avoid error.

In our session about ghosts we exposed an error in thinking: If there is a Holy Ghost, there can also be other types of ghosts.  This of course we dismissed.  When we translate properly and read Holy Spirit, we can pose the question “if there is a Holy Spirit are their unholy spirits?”  The answer to that question is yes.

War broke out in Heaven. Michael and his Angels fought the Dragon. The Dragon and his Angels fought back, but were no match for Michael. They were cleared out of Heaven, not a sign of them left. The great Dragon—ancient Serpent, the one called Devil and Satan, the one who led the whole earth astray—thrown out, and all his Angels thrown out with him, thrown down to earth.

We can only speculate as to when this occurred, so we won’t.  A war in heaven is always a necessary component in apocalyptic literature. The picture here is of Lucifer’s rebellion.  The scholars tell us that Lucifer was one of God’s mighty angels and that when the prophet Ezekiel address the King of Tyre it is really Lucifer that is revealed.

'You were the model of perfection, full of wisdom and perfect in beauty….

Your heart became proud on account of your beauty, and you corrupted your wisdom because of your splendor. So I threw you to the earth; …”

The Prophet Isaiah is prophesying to the Babylonians, yet again the scholars suggest that these words also describe Lucifer the Morning Star, the son of the dawn

How you have fallen from heaven, O morning star, son of the dawn! You have been cast down to the earth, you who once laid low the nations!

You said in your heart,  "I will ascend to heaven;  I will raise my throne above the stars of God; I will sit enthroned on the mount of assembly, on the utmost heights of the sacred mountain.  I will ascend above the tops of the clouds;  I will make myself like the Most High." But you are brought down….

Thus Lucifer originally known as the Morning Star became Satan, or as the word means Adversary.

Demons are fallen angels.  In scripture we are hard pressed to distinguish between demons, evil spirits, and unclean spirits.  There may be slight differences but for the most part they are lumped together as spiritual forces in rebellion and opposition to God (Ephesians 6:12).

The demons of horror movies, Japanese manga, and folklore are fiction.  So scratch those images from your mind.  Demons would be a whole lot easy to deal with if they we’re so outwardly identifiable. But the Apostle Paul tells us that Satan and his demons, evil spirits, uncleans spirits are masters of the bait and switch.  They look good at first but then, the promises turn into curses.

Satan disguises himself as an angel of light. So it is no wonder that his servants also disguise themselves as servants of righteousness.

We may conclude that Satan, its fallen followers, and its earthly followers are or in them reside, evil spirits. We may call the evil spirits demons.  Forget the demons of Hollywood.  Better to think of something that is seductive and tempting, something that motivates you to seek first something other than the kingdom.  Most often that something other than the kingdom is doing exactly what you want, doing what satisfies your desires that are out of sync with God’s will for humanity.  To gain insight as to how demons, evil spirits work read The ScrewTape letters, a fictional account of a demon trying to destroy the faith of a believer.

In the New Testament there are 58 references to exorcisms.  An exorcism refers to evicting an evil spirit from a human being.  Recall we are to strike a middle way between being overly concerned with the demonic and totally disregarding the demonic.  Not all our unrighteous human behaviors or illnesses are demonic, then again not all our deviant behavior can be a diagnosed disease. Often the two are so intertwined it is hard to distinguish between the physical and spiritual.  Not all evil behavior is caused by demons, not all psychotic behavior is caused by demons, but in some instances it may be so.

When the sun was setting, the people brought to Jesus all who had various kinds of sickness, and laying his hands on each one, he healed them. Moreover, demons came out of many people, shouting, "You are the Son of God!"

It should be brought to your attention that all the exorcism in the Mathew, Mark and Luke all have a teaching attached to them.  There is a lesson for us to learn. So don’t waste your time looking for a method to become an exorcist, better to spend your time learning the lesson the exorcism is teaching.

I have never performed an exorcism.  But I have gotten the Heebie-jeebies in the presence of certain individuals.  An alarm bell goes off in my spirit that something is not right with an individual, something spiritual is off, something beyond just being nuts, which I believe “nut” is a new diagnosis in the DSM 7.   I have also experienced vibes, interpreting them as a seduction or a hostility.  I have seen eyes that looked dead inside. I have prayed for individuals that bondage be broken, that the strongman be tied up, that the Holy Spirit would inhabit a soul casting darkness out.  I have never commanded a demon to come out of someone.  I have heard of what appears to be demonic activity and people being freed, but never witnessed it myself. Still I believe that evil can personify and when it does the possibility exists that it is one of Satan’s minions having entrapped a person. Just as you invite the Holy Spirit to come into your life, most likely a person has to invite a demon to take up residence within them.

…the Spirit in you is far stronger than anything in the world.”

The Holy Spirit in you is no match for any evil spirit.  Do you have the Holy Spirit in you?  The indwelling of the Holy Spirit is God’s gift to those you believe the gospel.  Having acknowledged your estrangement from God for your many sins, believing that Jesus made atonement for sins to be forgiven and reconciliation with God possible by His death upon the cross and you made a sacred vow, committing yourself to be a follower of Jesus.  Then a simple request, calling on Jesus to save you and the Holy Spirit enters you and empowers you to become a forever follower of Christ.   As you follow you are set free from habits, attachments and addictions that deter you from living your life to the full.  If you are not a believer, today is a good day to make such a decision.

Jesus sent out 72 among those following Him in 36 groups to preach the kingdom and heal the sick.  So off they go to the various settlements and towns in the surrounding area.  This is their report on their return:

The seventy-two returned with joy and said, "Lord, even the demons submit to us in your name."

Jesus said, "I know. I saw Satan fall, a bolt of lightning out of the sky. See what I've given you? Safe passage as you walk on snakes and scorpions, and protection from every assault of the Enemy.

Then Jesus tells them the reason that they have had authority to preach and to heal and to overcome the demonic is because they have placed themselves under the authority of God.  If you walk in the way of the Kingdom which is love motivated obedience to God’s will and love motivated service to others, you are under God’s authority and have nothing to fear from evil spirits.

Remember this though.  Demons are the enemy and they are out to get you, to destroy the righteousness, joy and peace that is yours in Christ.  They want to make shipwreck of your faith (1 Peter 5:8).  You are in a spiritual warzone (John 15:18-20).  The apostle Paul emphatically instructs us to put on the full armor of God, be ready, 24-7-365.

God is strong, and he wants you strong. So take everything the Master has set out for you, well-made weapons of the best materials. And put them to use so you will be able to stand up to everything the Devil throws your way. This is no afternoon athletic contest that we'll walk away from and forget about in a couple of hours. This is for keeps, a life-or-death fight to the finish against the Devil and all his angels.

Be prepared. You're up against far more than you can handle on your own. Take all the help you can get, every weapon God has issued, so that when it's all over but the shouting you'll still be on your feet. Truth, righteousness, peace, faith, and salvation are more than words. Learn how to apply them. You'll need them throughout your life. God's Word is an indispensable weapon. In the same way, prayer is essential in this ongoing warfare. Pray hard and long. Pray for your brothers and sisters. Keep your eyes open. Keep each other's spirits up so that no one falls behind or drops out.

---Demons, evil spirits, unclean spirits are real.  There is no need to fear demons, just defeat them. Put on the full armor of God , make your stand: “I am a child of God, a disciple of Christ, a person under authority, and by that authority corrupt this place no more, depart in the name of Jesus whom I serve.”

There are no magical incantations, no rituals, just faith.  You are in a spiritual war. “Be strong and courageous. Do not be afraid or terrified because of them, for the LORD your God goes with you…” (Deuteronomy 31:6).