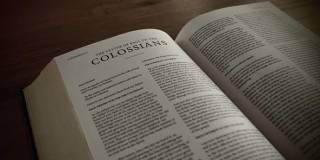 Being a follower of Jesus, you never go it alone.  There will be someone in the spotlight, but there will also be someone who turned the spotlight on.  You will always need support from others to carry out your mission to further the kingdom and to live your life to the full.  In the closing of this letter, the Apostle Paul gives us the names of some of the supporting cast and the jobs they have been called to do.  To live the way God desires you need close companions old and new.

Law and order in the first century are not like today.  Being a friend to a prisoner put you in danger of being imprisoned.  So these folks that Paul named put some courage in their faith and was willing to be identified with this criminal.  They had faith enough to risk, call it a “risking faith,” to walk into potential danger to do what was necessary.

Risking faith puts even your life on the line.  Risking faith requires no guarantees of the desired outcome.  You believe that you are right and you go for it.

7 My good friend Tychicus will tell you all about me. He's a trusted minister and companion in the service of the Master. 8 I've sent him to you so that you would know how things are with us, and so he could encourage you in your faith.

9 And I've sent Onesimus with him. Onesimus is one of you, and has become such a trusted and dear brother! Together they'll bring you up-to-date on everything that has been going on here.

10 Aristarchus, who is in jail here with me, sends greetings; also Mark, cousin of Barnabas (you received a letter regarding him; if he shows up, welcome him); 11 and also Jesus, the one they call Justus.

These are the only ones left from the old crowd who have stuck with me in working for God's kingdom. Don't think they haven't been a big help!

12 Epaphras, who is one of you, says hello. What a trooper he has been! He's been tireless in his prayers for you, praying that you'll stand firm, mature, and confident in everything God wants you to do. 13 I've watched him closely and can report on how hard he has worked for you and for those in Laodicea and Hierapolis.

14 Luke, good friend and physician, and Demas both send greetings.

Tychicus at this time served as Paul’s envoy.  He is mentioned as one of Paul’s companions in Acts 20:4 where we also learn he was from western Asia. We know Paul sent him to Ephesus and in this correspondence, he was going to Colossae to fill in the gaps.  The gaps were not urgent, yet important things the congregation needed to hear.  Tychicus would also bring more details on what was going on in the ministry.  Tychicus was Paul’s Public Relations man, Paul’s messenger, sent when Paul himself could not come.  Tychicus was a well-traveled and trusted believer; a man of courage, diligence, and integrity. Someone whose presence brought encouragement, hope, and joy to the hearts of those he visited.  [https://cloudofwitnesses.org.uk/studies/tychicus#:~:text=Tychicus%20then%2C%20as%20a%20well-travelled%20and%20trusted%20believer%3B,joy%20to%20the%20hearts%20of%20those%20he%20visited. ]  As God ambassador to the people in your world you will do well to be one who brings encouragement, hope, and joy.

Onesimus was a runaway slave. We must have been pretty shrewd and resourceful because he got a long way away from the place of his enslavement, and still hadn’t been captured, well not by the authorities.   During the time of his escape, Onesimus came in contact with Paul and bent the knee upon hearing the Gospel.  Paul calls him a faithful and beloved brother. That was a huge endorsement.  You can read the letter Paul sent to Onesimus owner Philemon, it is the 18th book in the New Testament and if you start in Genesis the first book of the Hebrew Bible count off 56 books more books and the next one is the letter.  It’s much quicker just to use the table of contents located at the beginning of your bible.  Even quicker to use a search app. Onesimus provided aid to Paul while he was jailed.  In those times, a prisoner was dependent on outsiders for the necessities of life.  In the Kingdom, you have the power to make what you did wrong right, and in the process of making things right be a blessing to others.

Aristarchus is part of that group of companions mentioned in Acts chapter 20.  [He came from Macedonia.  If you don’t know where Macedonia was it was in the Balkan region.  That was helpful, wasn’t it?  North of Greece, South of Serbia and Kosovo, West of Albania, and East of Bulgaria.  Well, I guess being a Macedonian isn’t as important as knowing that he lived in Thessalonica (Acts 20:4).]  I imagine he was a tough guy.  When there was the Ephesus riot over Paul’s preaching, Aristarchus was captured by the mob (Acts 19:29). When imprisoned Paul requested his case be heard by Ceasar Aristarchus was on the boat with Paul as they journeyed to Rome (Acts 27:2).  As of Paul’s writing Aristarchus is named a fellow prisoner.  Aristarchus is a man who goes through hell and back and back again to stand with his friend Paul, that’s loyalty and integrity an examples of what followers of Jesus do.

Mark failed, when things got tough he got going leaving Paul and Barnabas in the middle of their first missionary journey (Acts 13: 5, 13).  At the outset of the second journey, Barnabas and Paul parted ways over whether to take Mark with them.  Mark travels with Barnabas and matured.  Legend has it that it was Mark who planted the church in Alexandria Egypt.  Now at the time of this letter, Mark has been reunited with Paul and Paul calls him one of the most useful to him and the Kingdom (Philemon 1:24, 2 Tim 4:11).  Considered useless, now considered indispensable.  Don’t allow past failures to keep you from future victories.  The past does not define who you are, where you are going now does.

Paul mentions “Jesus, who is called Justus.”  Scholars have not been able to find any additional information on this companion of Paul.  But this we know, Rome was not a friendly place to Paul.  He was imprisoned there and may have been executed.  In tough and dangerous times still Justus didn’t leave Paul’s side in fear of persecution.  [https://www.biblestudytools.com/encyclopedias/isbe/jesus-justus.html ]  Justus is an example to us of staying faithful to the cause even in the face of murderous opposition.

Have you read any of the books Lee Strobel has produced?  Lee does investigative reporting, gathering information, consulting documents, and doing interviews to get the story straight.  Lee Strobel is a lot like Luke.  Luke was a trusted companion of Paul.  It is through Luke’s careful research that we have what he referred to as an orderly account of Jesus' ministry (around A.D. 60. About 30 years after the resurrection).  Luke also records what happened with the Apostles, and the early church, and of course was an eyewitness to Paul’s mission.  Luke was an intelligent man, both a medical doctor and a meticulous historian, he spoke Greek, Hebrew, and Aramaic [  Profiles of Faith: Luke - Paul's Beloved Friend and Companion | United Church of God (ucg.org)], and Paul calls him a beloved friend (Colossians 4:14).  When someone accuses those who follow Jesus of being simpletons, suggest they do a little research into this man named Luke.

Demas is an interesting character.  Paul says he is sending greetings to the congregation along with Luke.  In the letter Paul writes to Philemon Demas is listed among Paul’s co-workers.  In a much later letter Paul wrote to his protégé Timothy we read that Demas “chasing fads, went off to Thessalonica and left me here”  (2 Tim 4:10 (MSG).  The fads that got Demas off track were most likely the teachings of the Gnostics and or the Judaizers or just because of the temptations the world offers (1 John 2:19).  Demas was on the right road, with one of the greatest men in the history of Christianity, one time a co-laborer, now  Paul sees him as a deserter.  There’s a lesson for us here also, “finish the race” (2 Timothy 4:7).  Finish the race so you don’t get disqualified for the prize for which God has called you heavenward in Christ Jesus (2 Timothy 4:7-8, Philippians 3:14).  Discipleship is a non-stop lifetime journey that culminates in life eternal.

Tychicus, Onesimus, Aristarchus, Mark, Justus, Luke, and this time Demas and we have previously read about Epaprahas, these are Paul’s companions in a most difficult time.  Paul’s in jail.  Yet these brothers are supporting him, making sure Paul had what he needed to be effective in his calling, making sure that the Message was still being told, men and women converted, and disciples maturing in the faith.

Do you realize that is what you as a part of this congregation have done for me in my most dire of circumstances, you supported me, mourned with me, rejoiced with me, and have done your best to make sure I have had everything I needed to be effective in carrying out my calling.  Oh, sure some played the role of Demas, but not you.  You have stood by me.  Thank you.  You are all heroes in my book.

Here is what we can take home with us from this teaching:

As God's ambassador to the people in your world you will do well to be one who brings encouragement, hope, and joy.

You have the power to make what you did wrong right and in the process of making things right be a blessing to others.

Loyalty and integrity are also part of the wardrobe believers are to wear.

Don’t allow past failures to keep you from future victories.  The past does not define who you are, where you are going now does.

Disciples stay faithful to the cause even in the face of murderous opposition.

Christianity engages the intellect.  Use that brain God gave you to make sense of faith and life.   Know what you believe and why you believe it.

Discipleship is a non-stop lifetime journey that culminates in life eternal.

We all need brothers and sisters in Christ who will stand by us in dire circumstances supporting us, encouraging us, and interceding for us.  Gather that team around yourself, and be part of a team like that.  To live the way God desires you need close companions old and new.